After a few fallow years, oil and gas drillers may be poised to unearth new reserves in the Asia-Pacific, according to energy consultant Wood Mackenzie Ltd.

Some of the world’s biggest explorers are drilling wildcat wells in places like Pakistan, Indonesia and Papua New Guinea this year, hoping to discover the massive deepwater finds that have largely been missing from the region since firms slashed spending following the 2014 oil price crash. 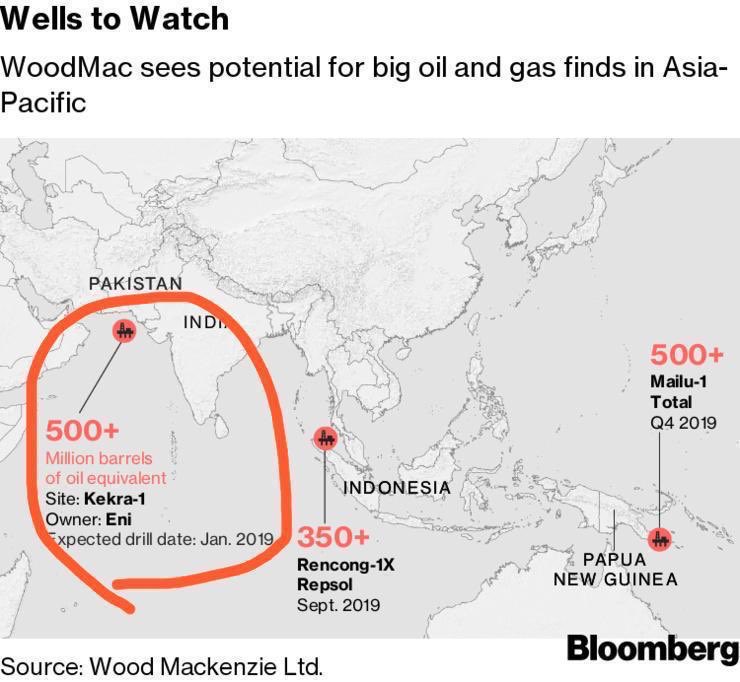 “Explorers are getting a little bit more ambitious in this part of the world,” Andrew Harwood, the consultancy’s Asia-Pacific upstream research director, said in an interview in Singapore. “These are huge companies with global portfolios; they’re not spending the money to drill unless they have a reason to be excited.”

Wood Mackenzie expects mergers and acquisition spending in the region to total about $8 billion in 2019 after growing 60 percent to $8.7 billion 2018. Activity will be focused around divestments in Southeast Asia by companies that want to focus spending on U.S. shale.

Here’s a closer look at the three Asia-Pacific prospects Wood Mackenzie is paying the most attention to:

Pakistan
A group including Eni SpA and Exxon Mobil Corp. will start drilling the Kekra-1 well this month in deepwater south of Pakistan. The country’s onshore natural gas production has been declining after years of under-investment, leading to the start of liquefied natural gas imports in recent years. Growing demand for the fuel has made the drillers more confident that they’ll be able to sell any gas from a sizable development, Harwood said.

Indonesia
Repsol SA could start drilling its Rencong-1X well north of the coast of Sumatra in the third quarter. The Spanish firm is seeking partners to invest and defray risks, Harwood said. Indonesia has leased out several blocks around Rencong, so a find could spur a ripple of activity. It’s also near the Arun LNG terminal, one of the world’s earliest liquefaction plants and now an import terminal to serve Aceh and Sumatra.

Papua New Guinea
Total SA could spud the Mailu-1 well in ultra-deep waters south of Papua New Guinea late this year. The French major is looking for oil, Harwood says, but even if it turns out to be gas it could be tied into LNG export infrastructure that the company is already planning to build in the country.